US, Russia see path forward on Syria but clash on election meddling 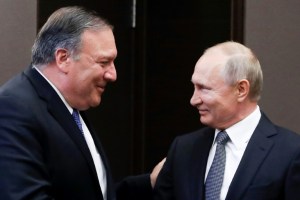 Russia and the United States voiced hope Tuesday for better ties including working together in Syria as President Vladimir Putin welcomed Secretary of State Mike Pompeo, but tensions were laid bare in a clash over election meddling.

Speaking for nearly two hours late into the evening in Putin’s forested dacha in the Black Sea resort of Sochi, Pompeo became the highest-ranking American to meet the Russian leader in 10 months.

“I would very much like your visit to Russia to benefit Russia-US relations and promote their development,” Putin told Pompeo as he took a seat across from him in a sleek conference room, saying that they should “fully restore” relations.

Pompeo — who like most of the US political class, with the major exception of President Donald Trump, has been outspoken in his criticism of Putin — said that the two countries found areas on which to cooperate, and voiced optimism in breaking a deadlock on Syria.

“We had a very productive conversation on pathways forward in Syria, things we can do together where we have a shared set of interests on how to move the political process forward,” Pompeo told reporters at the airport before flying out.

The United States and Russia are on opposite sides of Syria’s brutal eight-year civil war, with Russia the primary backer of President Bashar al-Assad.

Pompeo said that he and Putin agreed on ways to move ahead with a long-delayed Syrian-led committee that will rewrite the constitution in hopes of a political end to the conflict.

The top US diplomat also said that the United States and Russia largely saw eye-to-eye on Afghanistan, where Trump wants to pull troops, and North Korea amid Trump’s diplomatic drive for a nuclear accord.

Hanging over Trump’s quest for warm ties with Russia have been persistent allegations that his campaign worked with the rival power to swing the 2016 election to the mogul over his rival Hillary Clinton.

Putin hailed the two-year investigation by special counsel Robert Mueller that did not find collusion by the Trump campaign — but documented extensive meddling by Russia, especially by manipulating social media.

“Despite the exotic nature of Mr Mueller’s commission, on the whole he conducted quite an objective investigation and confirmed the absence of any collusion between the US administration and Russia,” Putin said.

Pompeo, speaking earlier at a joint news conference with Foreign Minister Sergei Lavrov, acknowledged deep differences on election meddling — and warned Russia to stay out of next year’s vote.