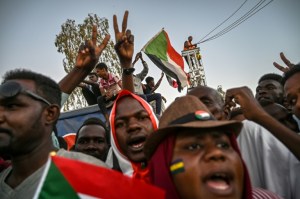 Sudanese army rulers and protest leaders Wednesday agreed on a three-year transition period for transferring power to a full civilian administration, even as negotiations over a new sovereign ruling body remain unfinished.

The protest movement is demanding a civilian-led transition following 30 years of iron-fisted rule by now deposed president Omar al-Bashir, but the generals who toppled him have been holding onto a leadership role.

Talks between the two sides resumed earlier in the week but were marred by violence when an army major and five protesters were killed by unidentified gunmen at a long-running sit-in outside military headquarters in Khartoum.

The two sides announced early Wednesday after nearly 12 hours of negotiations that they had reached an agreement on the transition period.

“We agreed on a transitional period of three years,” Lieutenant General Yasser al-Atta, a member of the military council told reporters.

Atta said a final agreement on the sharing of power, including the forming of the next ruling body — the sovereign council — will be signed with the protest movement, the Alliance for Freedom and Change, within a day.

“We vow to our people that the agreement will be completed fully within 24 hours in a way that it meets the people’s aspirations,” Atta said.

He said of the transition period, the first six months will be allocated to signing peace accords with rebels in the country’s war zones like Darfur, Blue Nile and South Kordofan.

Protester Mohamed Abdullah told AFP that he was happy the way the negotiations had turned out so far.